In the summer of 2003 Big Seas Productions LLC acquired video footage of over 240 offshore powerboat racing events from Phil Lewis and NNRT Inc. The footage spans the timeframe of 1978 to 1992.  NNRT covered offshore races all over the United States as well as around the globe including events from Gurnsey 88, Cowes 89, Dubai 1990, 1992 , Japan 1990, New Zealand 1986 and the Argentina Worlds in 1978. All of the masters are on 3/4 Umatic, 1 inch or Beta SP tape.

NNRT in the early 80's was the hot product with a one of a kind camera mount that to this day out shoots anything in the sport. Plus they were the only team to ever perfect live to tape coverage.  Rich Luhrs (formerly of NNRT) used to narrate at a 120mph in a helicopter with the doors off, 10 feet over the seas and 20 feet abreast of the action.

Big Seas Productions LLC's mission is to create an extensive DVD collection that will tantalize any offshore racing fan as well as tell a story. Here the offshore racing fan will find nearly everything on this sector. From the historic Offshore Grand Prix races, team portraits to exciting background features.

There is too much history captured on film for the stories not to be told. No one to this day has put the offshore powerboat racing history story together until now....

Big Seas Productions LLC exclusively and proudly uses DL Creative Services for all of our editing and final DVD production.

Rich Luhrs – A lifelong boat racer, Rich has enjoyed success in OPC and Offshore racing. Operating in tandem with George Linder, he started Image Boat co, the creators of the world renowned Shadow 21’ vee and the revolutionary 30’ Shadow Cat. Later he conceived and owned Conquest Marine Inc. a respected builder of custom one-off wood and fiberglass composite race cats. Rich has also enjoyed a long and respected career as a color commentator for various network telecasts of Offshore races and Poker Runs for all of the major sanctioning bodies in the sport. In addition he has authored numerous performance and racing columns for various boating periodicals. In tandem with his son Darren, “the world’s number one fan, Rich can be found prowling performance boat venues worldwide. (known as T2X on OffshoreOnly.com)

Darren Luhrs – Darren is known around the offshore racing circuit as "the world's number one fan!'. Darren has traveled all over the United States attending offshore races. Darren's knowledge of offshore racing is nothing short of remarkable. From the teams, to the players and the boats, Darren's knowledge is unequalled. Darren is the President of DL Creative Services, a video production company that is responsible for all of the endless hours of editing and splicing that makes what we know as "the final product" for Big Seas Productions. Darren also has one of the largest offshore racing still photo libraries around.(known as DARRENUS1 on OffshoreOnly.com) 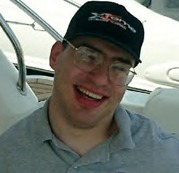 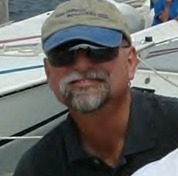